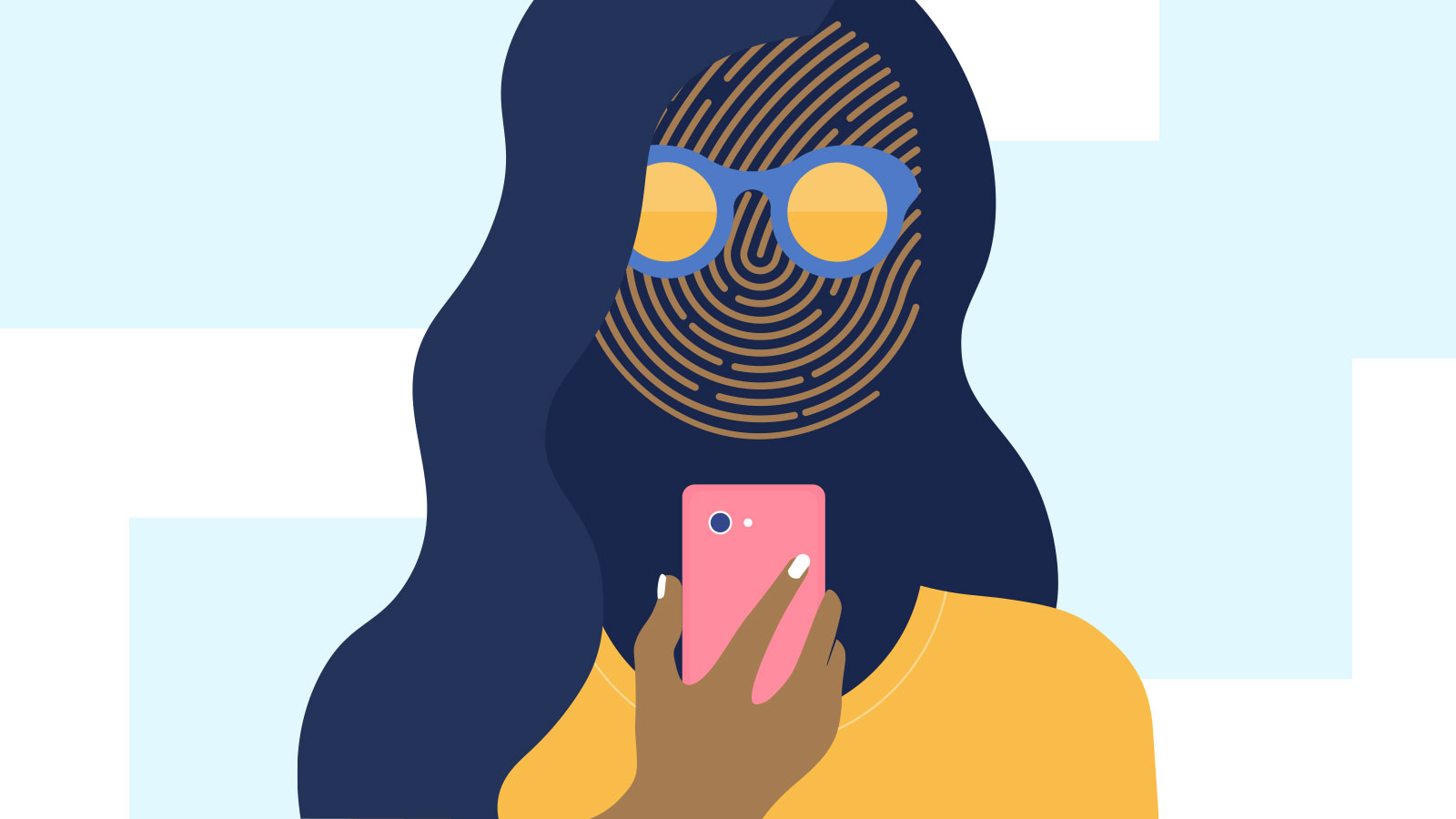 The Evolution of Personalization in Marketing

If your current and future customers respond only to personalized marketing, how will you rise to meet that demand?

By Nicole Rife and Ryan Yan

Philip Kolter, the father of modern marketing, once remarked in his book Principles of Marketing that “most firms have moved from mass marketing to segmented marketing, in which they target carefully chosen submarkets or even individual consumers.”

Let’s consider a T-shirt as a product offering. The functional value it provides to the consumer is some basic protection against the elements and some level of social propriety versus being naked in the streets. Of course, a T-shirt can be more than the functional value it provides. The style, design, and branding can reveal much about the consumer’s personality and provide signaling and other psychological benefits to the consumer. The consumer, in turn, might be willing to pay more to gain the psychological value offered by a more expensive luxury brand T-shirt.

Let’s assume you, as a business manager, have a set budget to market this luxury T-shirt to 100 people. Would you create one ad for the entire group? Would you create 100 different ads personalized for each customer? Or maybe you would do something between those options?

This scenario—and the questions to consider—explores why segmentation and its logically extreme variant, personalization, are popular practices in today’s marketing world. It doesn’t take an MBA to understand why Sephora shouldn’t serve me, Ryan Yan, makeup ads and send me skincare emails as I have no interest in wearing makeup (at least for now). However, it does make sense to provide recommendations and offers to my wife based on her buying patterns and clicks, so she’ll make, and continue to make, purchases.

The goals of segmentation and personalization are the same. They both aim to enable a sales lift (the numerator of a simple ROI calculation) and minimize marketing spend (the denominator). Now where do they differ? Segmentation uses geographic, demographic, psychographic, and other types of data to place consumers into groups. Personalization segments the market into groups of one. While seemingly impossible and perhaps undesirable years ago, today’s consumers demand to receive only relevant content, and a supply of data makes the delivery of personalized content possible.

Is personalization the way of the future, or is it creepy and, therefore, ineffective? We will explore the history, sentiment, and what to do with personalization.

A brief history of personalization

On a fundamental level, one could argue that personalization has been around for as long as markets have been around. We, as humans, take in enormous amounts of data through our senses and process the information through our highly developed brains. So, to meet the needs via goods and services, it only makes sense that a business will use information to best meet the needs of its customers, its collaborators, and itself. Let’s say I’m a fruit seller in non-modern times, and I overhear a potential patron expressing disgust for eating apples and anyone who might entertain doing so, and moments later speaking ravenously about pears. As a fruit vendor who has both, which fruit sample should I offer this potential customer?

In today’s world, replace a single fruit vendor physically overhearing a single customer with massive corporations “listening in” on billions of consumers’ conversations, clicks, and more, and replace brains with computers that will process that data to make tailored market offerings that turn into sales.

So, how did we get there? In New and Improved: The Story of Mass Marketing in America, Richard Tedlow chronicled the four stages of consumer targeting in the United States, beginning with fragmentation (pre-1880s), characterized by regional and local markets; to mass marketing (1880-1920s), think second Industrial Revolution, Model T’s and the rise of Campbell’s soup; to segmentation (1920-1980s); and finally hyper-segmentation and personalization (1980s to present). This does not mean that fragmentation, mass marketing, and segmentation do not exist in today’s marketing landscape. In fact, just because personalization is available in your marketing toolkit does not necessarily mean you should use it. The following sections explore generational preferences for different types of segmentation and applications of personalization.

Studies show that millennials expect personalized experiences more than any other generation. This expectation is so high that many companies have gone beyond digital targeting efforts, even creating drinks and snacks with names printed on them. While younger generations see personalization as a requirement, Gen Z also values authenticity and companies with a cause or mission more than other generations. Gen X and Baby Boomers hunt for deals and value product recommendations via digital retail, with Gen X also engaging with deal emails. Personalized messages that are delivered through trusted channels and aligned to generational values are key to gaining trust across generations.

How to think about it

While many brands appeal to multiple generations, some have conducted campaigns exemplifying those that best resonate with each generation. TOMS Shoes’ “buy one, give one” campaign aligned with Gen Z’s values of authenticity and fulfilling a mission, and the shoes also were promoted through popular social media channels frequently used by Gen Z. That model has since evolved, but many other businesses followed its lead. Millennials, the most demanding of the generational cohorts in terms of personalization, have been targeted by many organizations. Coca-Cola’s “Share a Coke” campaign resonated with millennials because even those with less-familiar names were able to shop online and create a bottle with their name on the label. Slickdeals emails a list of daily deals and bargains that appeal to Gen Xers, who value low-price deals and display high engagement through email. Baby Boomers also value deals, but they value product selection over personalization, which means product recommendations like those on Amazon (where they report shopping) could best reach this cohort. 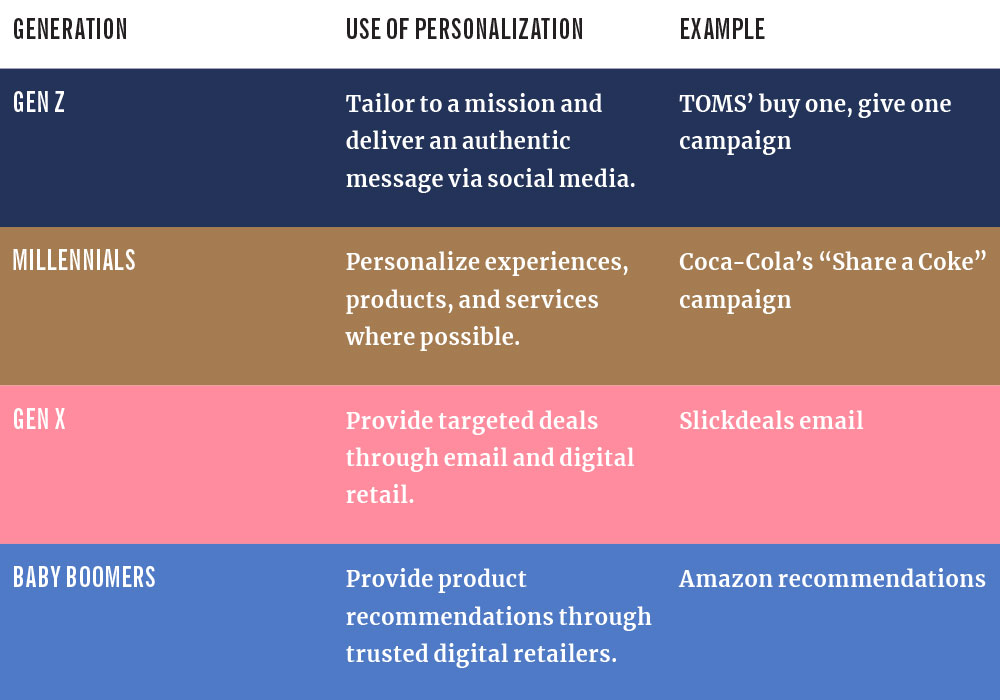 How to use it

Organizations should consider several factors when creating a personalization strategy, including if they even should implement such a strategy. Consider the purpose of your organization’s marketing and where your customers fall on the path to purchase. Are you trying to gain awareness, or are you at the end of the sales funnel and trying to increase conversion? Personalization may effectively increase conversion but be a bit too expensive for generating awareness to those further up in the funnel. Consider if personalization is right for your customer base and the level at which they are segmented. Personalization may not be effective for broader segments, but it would be appropriate for a hyper-segmented customer base.

Consider the following factors when determining if personalization is right for your organization:

Next, the organization should consider which level of personalization is best for the business. Does the product type warrant personalization, or could you find ways to make personalization appealing? For instance, you may be able to easily tailor an online product, but consumer packaged goods may require more ingenuity in identifying personalization opportunities. Product maturity should be considered because a growing product may warrant the investment to personalize, while a more mature product may not provide the same level of ROI. Consider the size of your customer base and if personalization is realistic. This could depend on if you have detailed data on customers to enable personalization. If you have a large amount of unstructured data that frequently updates and changes, then AI and machine learning may be a solution for personalization.

Consider the following factors when determining a level of personalization: 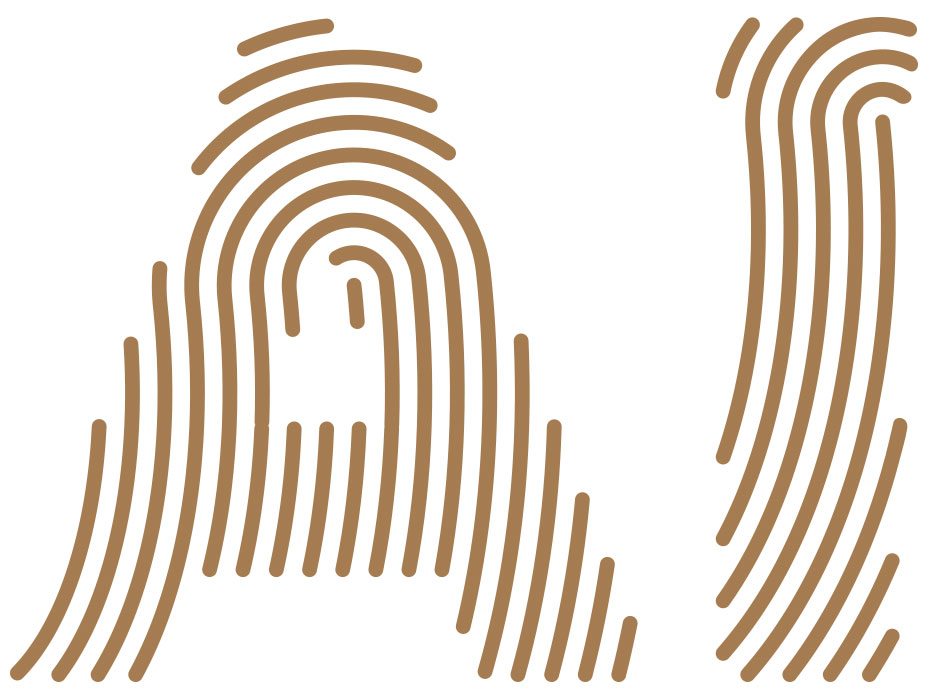 AI technologies can collect customer usage and behavior to continually learn and make more personalized recommendations for the customer.

While successful personalization campaigns spanned many channels in the past, the new frontier of personalization lies in AI and machine learning. AI programming enables certain responses, and machine learning continually updates the algorithms behind AI programs to improve those responses. These technologies can collect customer usage and behavior to continually learn and make more personalized recommendations for the customer. Netflix’s recommendations process mastered this process and serves as an aspirational example. As the customer watches more programming, the algorithm learns and updates using customer viewing behavior to recommend titles the customer would most likely enjoy. It even goes as far as to give a match percentage on how likely the customer is to enjoy each program.

Consider the following factors when determining if AI is right for you:

A final word about personalization

Personalization is neither good nor bad, right nor wrong. It is a tool marketers use to convey value of products and services, like any other tool. Just because your business does not invest heavily in personalization currently doesn’t mean your marketing efforts aren’t working. But we do challenge you to consider how your company can employ personalization to delight your customers now and in the future. Data and computing power increases in prevalence daily, making the barriers to entry for personalization smaller and smaller. If your current and future customers respond only to personalized marketing, how will you rise to meet that demand?