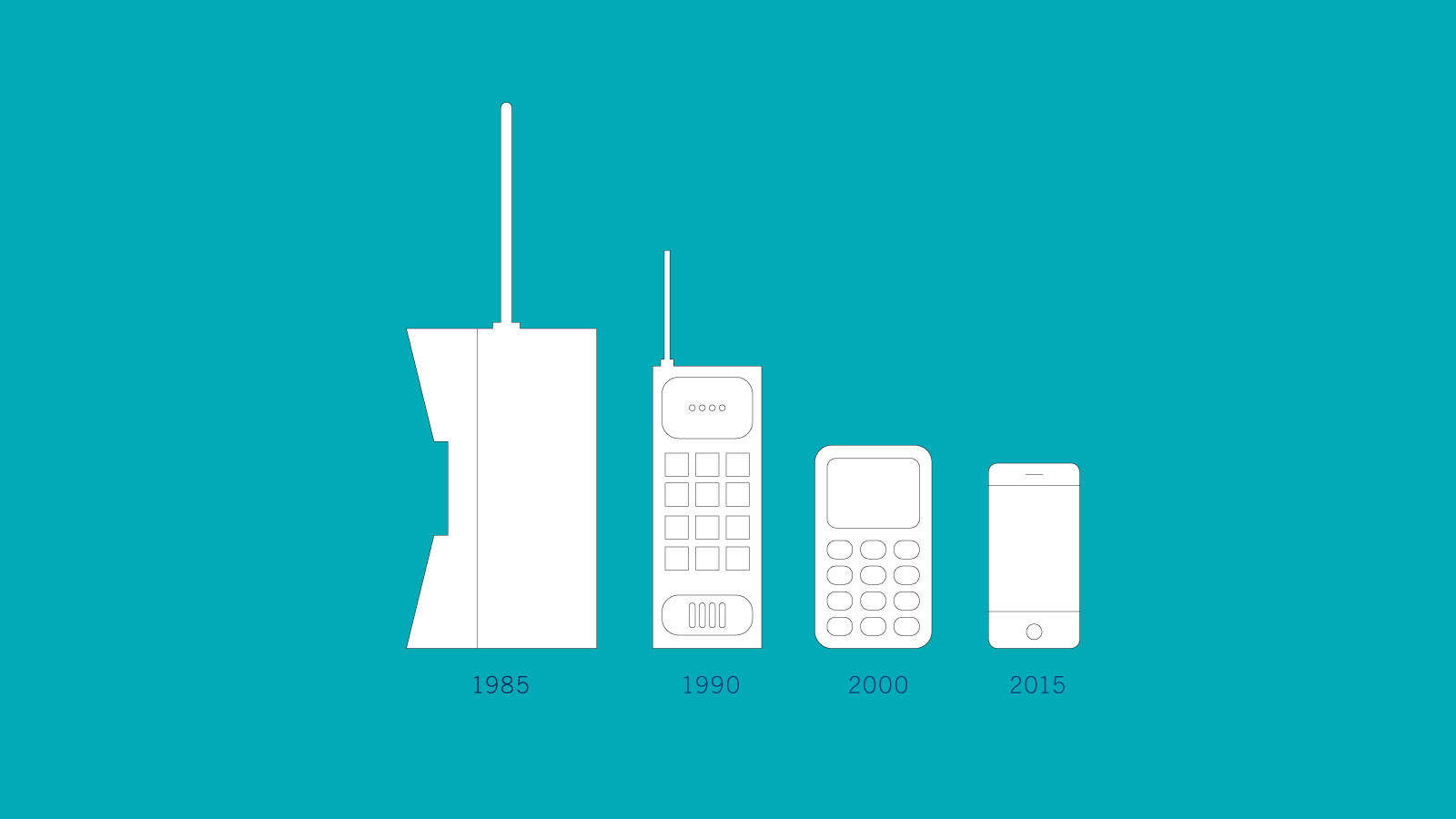 The Evolutional Convergence of Technology

The next big thing may not be a thing at all, but the convergence and connectivity of things.

By Sam Noyd and Seth Pelletier

Everyone is looking for the next big thing. But what if the next big thing is just putting all of our little things together? Let’s go back. Way back to 2007, when your phone had a hinge, you printed MapQuest directions, and your arsenal of devices included your trusty point-and-shoot, an iPod with the top MP3s, and — if you were really ahead of the times — a pedometer.

Look at how far we’ve come. The evolution started when you were finding your way using printed directions that you struggled to see at night. It progressed to suctioning a stand-alone navigation device on your dash. Now, you harness your phone to deliver crowd-sourced, real-time updates to get you where you want to go. Navigation is just one tool that has been absorbed by the snowball of smartphone integration. Your phone has also integrated your everyday camera, your iPod, and your day planner. The snowball is set to run over your wallet next.

In less than a decade, the phone has evolved from a simple instrument with one tune to a symphony of capabilities. It has gone from a technological staple, to a comprehensive toolkit that enables our connected life. But we’ll need more than a super phone to keep up.

Our connected life sits at the intersection of a variety of spheres, including home, work, play, and health.

Today your phone can notify your thermostat that you’re home and immediately adjust it to your desired temperature. While you’re out of town, a water sensor can tell your phone there is a leak in the laundry room. The connectivity of these devices working in unison saves lives and protects property.

This connectivity inherently creates additional value and a better user experience. Take, for example, a connected smoke and carbon monoxide detector. It not only alerts your phone of an emergency, but can tell your thermostat to turn off the furnace in the event of a dangerous carbon monoxide reading.

Your refrigerator might be able to recognize when you are running low on a favorite item, place an order with your preferred grocer, and have it available for in-store pickup or, if you prefer, delivery. Even your coffee maker is getting smarter. With options for Wi-Fi connectivity, it can now work with a wearable device and your calendar to know when you need to wake up and have a fresh pot ready.

Today, small businesses can accept credit card payments virtually anywhere through the use of their connected device and a small adapter. This has allowed them to offer additional convenience to their customers and gets them out from behind a cash register to interact with people face to face.

Tomorrow, when you install that water sensor we mentioned earlier, you might be able to designate a list of service providers to contact if there’s an issue. When the sensor is activated, you will not only know of a problem, but it can notify preferred service providers, who can respond with estimates and availability. For the service providers, this simple sensor could serve as a lead generation tool to help them deliver better customer experiences and build their client bases.

The future integration of connected devices could further revolutionize the way you transact business. We’ve already seen functionality that lets you leave your wallet at home and pay with your phone. The next step may be seeing this integration expand to offer more value in the form of security and convenience. Your phone senses that your wearable is not nearby, so it triggers additional security verification before authorizing a purchase. This additional layer of protection, when combined with others, could save millions of dollars by decreasing the fraud at major retailers we’ve seen splashed across headlines recently.

Fitness enthusiasts have always been gear junkies, from handheld GPS units for hiking to heart-rate monitors during training. In the early 2000s, fitness devices were starting to emerge, but usually only the hardcore athletes looked to these as valuable training tools. Now, those tools are evolving faster than ever with the “always on” nature of today’s mobile devices making them more accessible and more fun for all levels of fitness enthusiasts.

By using technologies such as Bluetooth, ANT+, and smartphones, runners and cyclists now track activity in real time, not only providing valuable training data, but also increasing safety by allowing family and friends to track their activity by GPS.

Application developers have also taken advantage of the proliferation of smart devices by adding social elements to what would be very basic activity trackers. For example, one application creates a virtual leaderboard for various segments, shows popular areas for activities, such as a local hill or stretch of road, and awards the fastest times with the title of “King of the Mountain.”

This has created a booming social network and virtual competition among like-minded athletes. Additionally, this has opened up an entirely new market for application developers. The millions upon millions of data points are being licensed to city planners across the world to help plan and place greenways and other recreational areas. This is just another way that the information gathered from wearable technology and other connected devices is converging with other aspects of life and business.

In the not-so-distant future, your wearable may be able to automatically dial emergency contacts if it detects an impact. Or transmit heart-rate data in real time to coaches or physicians for monitoring. With the evolution of mobile devices and connectivity, what was once a passive recording device is becoming a powerful tool athletes at all levels can use and enjoy.

While you would have been onto something if you carried a pedometer back in 2007, these days, everyone is sporting his or her newest fitness tracker. These devices have evolved to provide information on all sorts of metrics, including steps, distance, stairs, calories, sleep quality, and heart rate. They’ve even started integrating with your phone to show incoming calls, and sharing information with other apps to provide a better picture of your personal health and nutrition.

Tomorrow, you might be able to share this information with your health care provider to help him or her make better diagnoses. Rather than basing decisions on a single snapshot, this additional information will allow your doctor to identify trends over time and take better care of you and your family. Employers are already starting to offer discounted health care coverage to employees who agree to share fitness tracker data with health care providers.

Your wearable might one day be able to integrate with your car to know when you are driving and use your heart-rate data to sense when you are about to fall asleep. It could send a warning to the dashboard and a vibration through the wearable to let you know when you are too tired to drive safely. This changes it from a passive device that captures data to an active and powerful tool that recommends behavior changes to improve overall well-being.

There is immense potential for our smart devices to provide timely and valuable information through connectivity to help us make better decisions and mitigate risk. As with any advance, it comes with its own set of challenges. A key obstacle is respecting and clearly communicating the individual’s rights to privacy and security as their devices converge.

Another challenge with having so many electronic devices is finding a way to power them without having to change batteries all the time or charge constantly. We hope advances in connectivity will be mirrored by progress in battery technology and creative ways
to power our devices.

Finally, on the enterprise side, managing mountains of data and moving it efficiently and quickly will be key to delivering the value to everyone.

The next big thing might not be a thing at all, but rather the connectivity of all these things.
The line between devices is blurring. Instead of looking for the next gadget, let’s look for ways to seamlessly weave our devices together. Only then will we reach the next phase in the evolution of smart.

Now, if only my smart devices could go to the dentist for me.